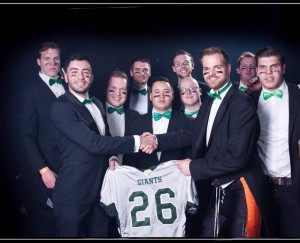 I went to Groningen Uni as a Erasmus student and while i was there i met with the Groningen Giants American Football team. They are the Gronigen city’s team and they were the national champions of Holland with a ”Perfect Season” last season and they are playing in Eredivisie (First Division) now. While i was there i contacted with one of their captains and told him that i am a American Football player from Turkey and i would like to meet with them and see their practices. They were super kind to me and i had chance to meet with one of their captains and he invited me to a practice and one thing led to another and they asked me to join a practice. After a while my stats was good and they asked me do i have a ongoing contract in Turkey or not. I didn’t had a contract so they offered me to play for them, with them and so it began. I played for them for 1 full season and at the end of the season we got invited to the Atlantic Cup which is kind of a European Champions League and we got the second place there and i returned to Turkey with the cup and as a player of Dutch 1. Division. I became a captain there for the Giants. 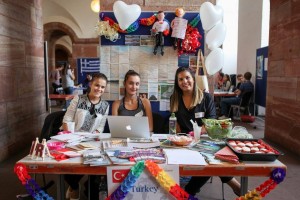 I would like to present the most beautiful memory I have ever made for my country. I was an erasmus student in University of Mannheim in 2016-2017 fall semester. They organized an event called â€śInternational Dayâ€ť. All exchange students were assigned to present and promote their own countries and schools. I thought that our country needs this support very much. It was a very difficult but special day for me to prove my country. I started to give cologne first and than gave them Turkish delight as it is in our culture. In fact, I wanted to add colorful things and showed myself and my country in a different way. Maybe 100 people came to my table, but I tried to tell them what we were doing in this country with all of my smiles in my face. Because I know that our sincerity is part of our culture. At the end of this competition, head of international office came and gave me a award because I won the competition. During the competition, I tried to show how I respect Turkey and show myself as a Turkish girl.Â